Through Brigitte Champetier de Ribes’ guidance and expertise, I have been in contact with the  developments of Bert Hellinger’s practice and insights up to his passing away in September 2019, keeping up to date with his written and audiovisual work, as well a Champetier’s work and continued development in tune with the Thinking Field or Spirit Mind, as Bert Hellinger used to refer to it. It is thanks to Brigitte’s continued evolution that I have also been able to keep up to date with other relevant work such as that of Rupert Sheldrake (morphic fields), Dr Hamer (New German Medicine) or Dr. Petr Gariaev (DNA Hologram) among others.

Before I began to facilitate family constellations for others, I started constellating my own issues alone in Ireland in March 2012, with Brigitte Champetier’s generous guidance. This allowed me to increase my perception skills and understanding of the Love Forces (or Orders of Love as Hellinger referred to them) and body signals, behaviours and dynamics through which the movement of the Spirit manifests itself in the energy field within which the sessions unfold. I have been facilitating family constellation workshops in the service of others following Hellinger’s and Brigitte’s new method monthly since June 2013, as well as facilitating individual constellations, at the Tipperary Community Centre and the Family Resource Centre of Hospital, Co. Limerick, until June 2014. After that I facilitated workshops assisted with cats at La Gatoteca, in Madrid, and since January 2016 I have been facilitating workshops and individual constellations in Getxo and Bilbao, in the Basque Country (Spanish side), where I have also facilitated constellations assisted with dogs (in Gallarta, Bizkay), facilitating individual distance constellations as well (face to face, by phone and online).

I have also presented papers based on my doctoral research at several international conferences (on the social phenomenon of the Basque tradition and instrument Txalaparta).

Prior to this, I also served life and others as an administrative assistant for different firms of the finance sector and state agents in Madrid, as a Spanish-English translator, house cleaner, ice-cream shop assistant, also as a supermarket assistant in Herne Bay, Kent, UK. As a call centre agent in Spain and Ireland, and also worked as  a researcher in the History section of the Limerick Civic Trust. 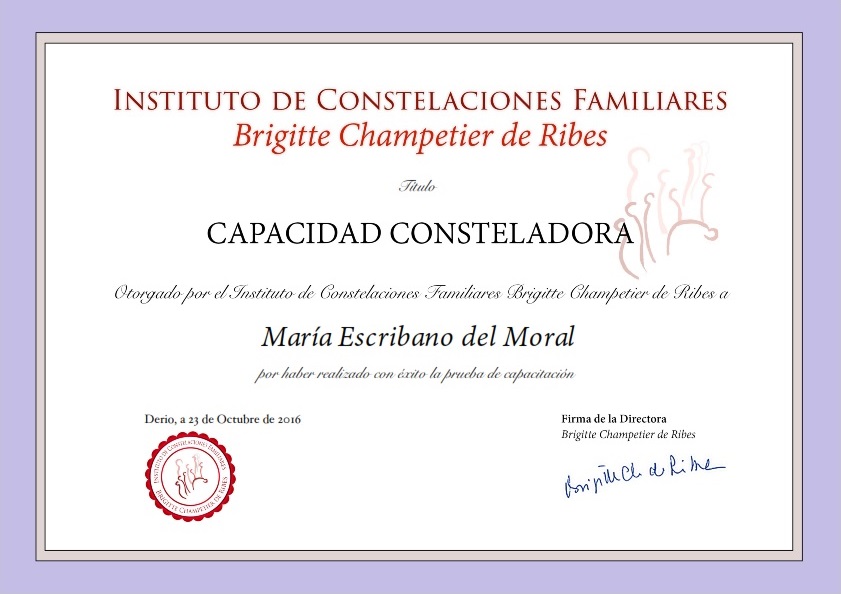 This website uses cookies to improve your experience while you navigate through the website. Out of these, the cookies that are categorized as necessary are stored on your browser as they are essential for the working of basic functionalities of the website. We also use third-party cookies that help us analyze and understand how you use this website. These cookies will be stored in your browser only with your consent. You also have the option to opt-out of these cookies. But opting out of some of these cookies may affect your browsing experience.
Necessary Always Enabled
Necessary cookies are absolutely essential for the website to function properly. This category only includes cookies that ensures basic functionalities and security features of the website. These cookies do not store any personal information.
Non-necessary
Any cookies that may not be particularly necessary for the website to function and is used specifically to collect user personal data via analytics, ads, other embedded contents are termed as non-necessary cookies. It is mandatory to procure user consent prior to running these cookies on your website.
SAVE & ACCEPT
Message Us on WhatsApp